Should I Be Alarmed?

Just found out that this poem will be published in the Winter issue of Prism Magazine at Oregon State University. This is officially my 6th published poem.
It's also one of my personal favorites.


Should I Be Alarmed?
- Craig Bidiman

For I find humor in the congregation.
And I admire the looks on their faces.
I stare long at their expressions,
hoping one day to feel it the same as they do.

All of the colors tease my attention span.
Look at the lights, the tiles, the ceiling fans.
I love how each building smells differently.
Like Lilacs, potpourri and freshly vacuumed pews.

It’s no mystery to me how wonderful a place
such as this can be perceived a circus.
Men and their suits, ties — women with dresses, eye-liner,
children with their boots, smiles and chemistry sets.

This is where the Lord dwells, yet I haven’t felt it
since I entered the door — should I be alarmed?
For what is this structure without its guest of honor?
An organized pile of wood — provoked and restless.
Posted by another musician at 10:57 PM No comments:

A Mess To Be Made


He hadn’t the slightest inclination that the ladder from his lofted bed was unbalanced. The ladder began to sway as he displaced his weight on the second wooden step with his right foot as he always did — he preferred stepping off facing away from his bed. However, his thoughts hadn’t connected the fact that the ladder had been resting on the cable from his laptop charger. The weight bearing down on the steps caused it to rock to the right. As he began to correct the action his left leg came down quickly on the step below his first. His leg missed the step and became entangled within the gaps in the wood and his other leg. His ladder fell, the force of his mass leading him down with it.

He heard a snap as his left leg sent transmissions of pain to his brain. Before his potential energy ceased, his face was bludgeoned on the metal television stand across from his bed. His cheekbone collapsed like being struck by a prize fighter’s knock-out blow. The impact of the fall brought upon a shock he hadn’t ever experienced. He exuded a loud yelp as he wildly tried to free himself from the confines of the ladder. The tangle was too intense to be undone without a full-bodied effort. His face secreted large amounts of blood from the substantial gash sustained from the blow of his television stand. All he saw was red.

Gazing to the pain that was still scissor-locked within the ladder betwixt his legs he fell into shock and began to vomit. The blood and vomit mixed to create a scent and mess most recognizable to someone in his line of work. Through the muddles of his curdling spew he could hear the hustle of his residents preparing for their day of classes ahead. He lied immobile and with his back to the door. My door is always unlocked, he thought to himself — his residents knew this as well. He tried to yelp louder, in hopes of getting their attention and to welcome someone in to save him from this. No one responded. He yelped again, this time spewing a little as he tried with all his might to be heard.

A knock at the door and he yelled for them to enter. But the door was locked. How the fuck is the door locked? The female resident asked if he were alright. He told her he wasn’t and to find someone to key into his room. – Okay. He listened as she scurried off. He muttered a prayer in hopes of it being heard from someone, somewhere. He lifted his face from the sick that engulfed it.

As he laid with half his tibia bone jutting out his left leg, he began to think of the first time he broke a bone. Chasing his brother around the house — the race to determine ownership of the last piece of pumpkin pie — ended in two fractured bones in his right arm. That was on his birthday. He thought of the first time he kissed a girl — she a seasoned vet by age thirteen, he a nervous, sweating prepubescent trying to move up one more notch in the social hierarchy of middle school. He thought of the last time he’d spoken to his father, who was in the doctor’s office waiting to be checked for his lungs again. In the usual daily rush he told his father he loved him and hung up quickly.

The female resident returned and said she couldn’t find anyone — that they were out to class already. He barked at her to try and use a credit card to get in. His weakness prohibited him from pushing himself up with his arms. The blood loss and vomit had begun to accumulate in large mass at the base of his television stand. The white shirt he wore to bed every night was now red with specks of spew. He failed to bring himself beyond an ill-stretched push-up position. His upper body wasn’t that powerful to begin with. Without the use of his legs, he knew his efforts were useless. Marathon training was now on the back burner and his budding days of swimming for cardio were also coming to an end.

Tears were added to the sick and blood as he began to think of everyone he could call at this moment. This could have been a reality if it weren’t for his phone placed at the head of his bed atop the loft kit. Click. His body was beginning to shut down. Sounds of a card being clicked and clicked and clicked in the jamb of the door behind him were proving ineffective. Fuck. He placed his face in the mess and let out another bark. He began to pray again. Click. 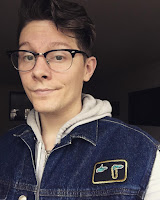 About the Author: Craig Bidiman is the Health Education and Promotion Specialist at UMass Boston. Craig holds an MEd in Higher Education Administration from UMass Amherst. He earned his undergraduate degrees in English and Secondary Education at Oregon State University, where he served as Memorial Union President for a year and was forever transformed to enter the realm of student affairs. Craig held assistantships in the Center for Health Promotion at UMass Amherst, where he served as a Masculinity Educator and advises the sex positive comedy troupe, Not Ready for Bedtime Players. Craig is also an avid painter, music reviewer, tattoo and vinyl collector, and professional wrestling nerd. Join the dialogue on Twitter at @CrigBididman ...or on Facebook at Facebook.com/bidimanc.